Skip to content
You are here:Home-Blog-Water Stress, Day Zero, and Why Should We Care?

Water Stress, Day Zero, and Why Should We Care?

Cape Town: The World’s First Developed City to “Run Out” of Water! 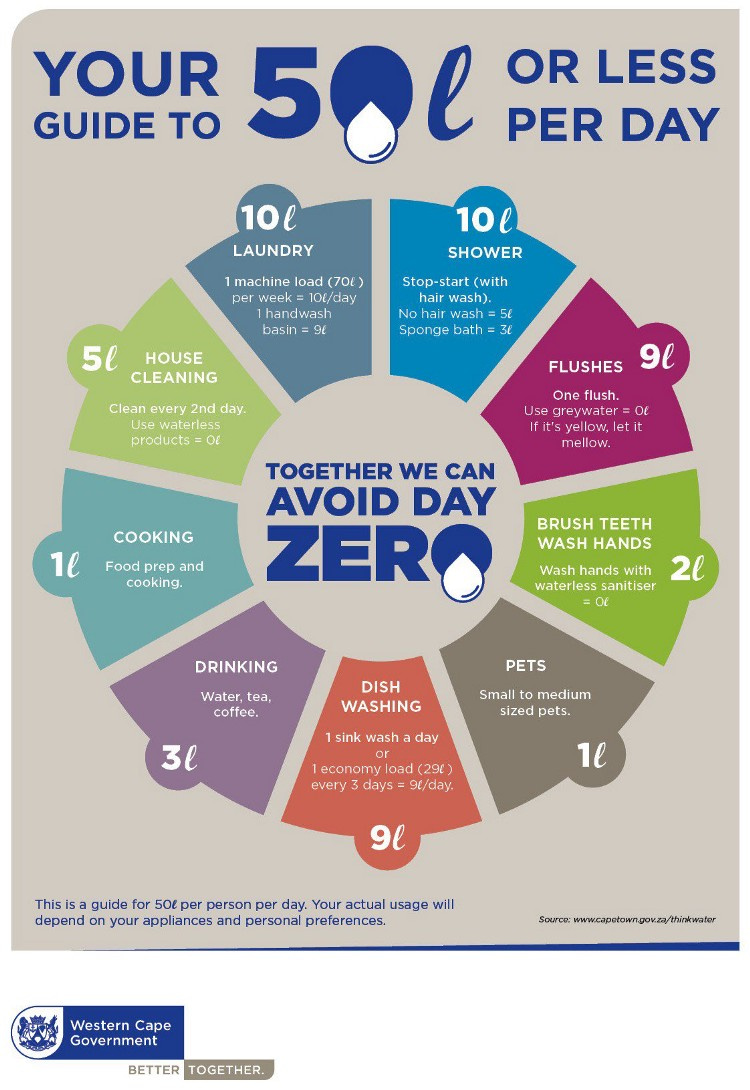 In 2007, the writing was on the wall: Cape Town, South Africa’s beautiful southern city on the sea, was coming close to “Day Zero”, the day when the municipal water would be turned-off for 4 million people. South Africa’s National Department of Water and Sanitation cautioned local government in Cape Town that declining rainfall and increasing water demand would force the city to provide itself with new water sources by 2015.

Taking the advice to heart, the city installed new water infrastructure, reduced demand and investigated new sources of water for public consumption. What they did not take into consideration was a 3-year drought — the worst in a more than a century.

As 2017 yielded to 2018, then-Mayor Patricia de Lille leveled with the public: “Day Zero”, when the water level of the major dams supplying the city reached 13.5%, would force the city to turn-off most of its water supply. This was anticipated to occur in April…three months away. Cape Town was about to become the world’s first modern city to run out of drinking water.

Essentially, citizens would now be restricted to only 50 liters (13 gallons) of water per person, per day. That works out to a 90-second shower, a half-gallon of drinking water, a sink full to hand-wash dishes or laundry, one cooked meal, two hand washings, two teeth brushings and one toilet flush. (See illustration above).

The arrival of Day Zero would mean that citizens would have to gather water in jugs from 200 collection sites across the city, under the guard of the South African Army and local police. The rainy season in the Cape Peninsular does not begin until June….

While citizens rationed water on the honor system — with over-users publicly shamed — water prices jumped by between 195% and 700%, fines for excess use were issued, limitations were placed on borehole use, and the municipality strictly limited the number of bottles one could fill with water or purchase.[1]

In the wake of the South African Day Zero scare, it became abundantly clear that this is not a local problem, but a global one. The World Resources Institute (WRI) promptly published its concerns that “dozens of other countries face similar risks from rising demand, mismanagement and climate change.”[2]

NASA and the European Space Agency began sharing their satellite data with WRI, Deltares Water Research Institute (The Netherlands), the Dutch government, Google Earth and other partners, to build a water and security early warning system for the world’s 500,000 dams. The goal is to forecast the social consequences of water scarcity on a global scale, including social instability (such as armed conflicts), economic crises and cross-border migration.

As they launched their cooperation in 2018, the partnership reported severe shrinking of reservoirs in Morocco, India, Iraq and Spain — any of which may be the next to face a Day Zero crisis. For their populations, it could spell disaster: politically, economically and socially.

Yes. It Can Happen In Your Country

While it is known that North Africa and the Middle East suffer chronic water scarcity, the problem is far more prevalent. In fact, in 2018 and 2019, the BBC and US News & World Report published their lists of the cities most likely to run out of drinking water. [Note: Cities in Morocco, Iraq and Spain were not listed.] They represent countries across all of the world’s continents, super powers, wealthy and impoverished nations, including tech powerhouses and industrial giants.

Cities Most At Risk of Running Out of Water[3],[4]

In addition to changes in weather conditions, pollution is a major factor contributing to water scarcity, according to the reports. Other contributors are increased populations, increased water consumption and tremendous loss of water through dilapidated infrastructure.

The problem of droughts, pollution, climate change and contamination has led to a global water scarcity issue, and there is an increasing need for a cost-effective solution. By using a game-changing technology that can extract water from thin air, populations around the world can enjoy fresh, clean drinking water with no need to replace infrastructures, or find new water sources.

TIP: If you haven’t already started talking about water scarcity with your family and friends, now is the time. In fact, please share with us how water scarcity plays out where you live. We are eager to hear from you!